Take this book and make it home 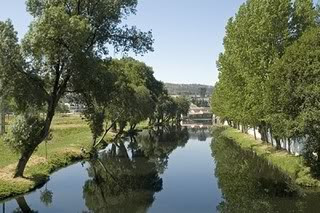 But what does it mean to take this book and make it home? What are the political consequences of claiming it as origin? If Novas Cartas brings with it the idea of “home”, and if home is that which is inherently different from an elsewhere, then the implicit connection between the book and one’s feminist identity ultimately reinforces the state of being tied to a specific location. In this case, the location is Lisbon, Portugal. I'm Portuguese, but I'm not from Lisbon. Lisbon is beautiful, with its famous light and charming eléctricos. People like Eugène Green make ravishing shots of the place, but Lisbon clearly isn't crossed by my hometown's ribeira. (Apparently that ribeira is stamped on my face, since old ladies in college dinners tend to ask condescendingly, so were is your village, my darling, once I tell them I'm from Portugal.) It gets more and more complicated, because I'm not from my hometown either. (I used to be, now I am and I'm not from there). Even if I were entirely from there, what a curious place to root my feminism. And yet, that ribeira stares at my feminism, day and night. Vem sentar-te comigo, ribeira, à beira do meu feminismo. Fiquemos assim, as duas, bucólicas e pensativas, a murar este ismo que um dia chegou de Lisboa. Underneath my goal to make the web of “clausuras” around the book implode lies a hidden desire to centralise, to find an origin, a specific geopolitical, temporal point, a stable, unchanging frame of reference pinning feminism down to a particular national ground (or local ribeira). My perception of the “book-as-root” ultimately signals an anxiety in relation to its status as “book-en-route”, in transit in and out of Portugal, into the world.
Posted by Ana at Monday, May 16, 2011 1 comment: