Guinea Bissau (and the Three Marias) 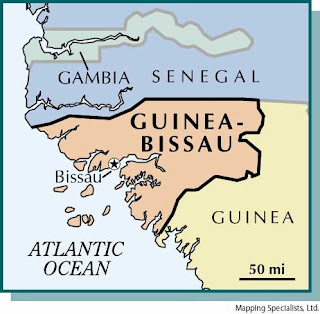 I've been receiving emails about the situation in Guinea Bissau. No-one seems to know exactly what is going on there, but from what I could gather, it boils down to an explosive mixture of military coups, repressive regimes, great famine, and international silence. The tone of the emails I'm receiving from the academic community in the global north reminds me of the three Marias' worry about what words can do.

Guinea Bissau: the bad news...
In nearly 40 years of independence, no elected leader has finished their time in office in Guinea Bissau. It's one of the world's poorest countries, with 70% living in poverty. It's the world's first narco state: a hotspot for the smuggling of cocaine from Latin America to Europe. It's heavily dependent on foreign assistance, with a massive foreign debt. It has an issue of impunity, with no prisons. It's considered to be one of the worst places in the world to be a mother.

Guinea Bissau: the good news!
Despite having been dogged by war, coups and assassinations, the country has been making progress to reverse violence and destruction. Young hip-hop artists are speaking out in Kriol against political violence. The House of Mothers is helping women to deliver their babies safely, offering them food and treatment. The UN is helping to build a police academy so as to better tackle organized crime. Bissau-Guinean Flora Gomes is putting Guinea Bissau on the map of international postcolonial cinema. And so on, and so on, and so on.
Posted by Ana at Tuesday, May 22, 2012 No comments: