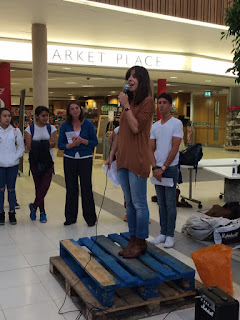 Since Brexit, there has been an increase in racist attacks, violence, intimidation and calls of “Go Home”directed at minorities in the UK. But surely what we call an “increase” in this case is not really an increase, but the eruption of something that was already there to begin with. Brexit has allowed some of us to abandon polite exchange or just plain silence and to replace it with the repressed: abuse, hatred, racism, sexism, and fear of the other. This wasn’t something new developing overnight as the votes were being counted. It was already there, lodged in them, in us.

Brexit has made me consider political correctness as a form of tacit control that does not necessarily allow us to overcome racism, sexism and hatred, because it does not lead to the kind of open, shame-free dialogue that enables unheard voices to rise up in protest and provocation, and for actual learning to take place. Political correctness, or what the Marxist theorist and cultural critic Slavoj Zizek calls “enforced niceties,” but which could also be called a protective shield, works very much like a disappearing act: what disappears and retrenches is white privilege, racism and sexism. Brexit has made me consider the possibility that the liberal tolerance that is the result of our world of enforced niceties may not be the best or most productive way of ending discrimination and violence. On the contrary, liberal tolerance can sometimes in fact lead to, and reinforce, zero tolerance of the other, because what we want from the other is that he or she abides by the enforced niceties or pretences created and patrolled by us. In other words, we want the other to be by our side, but only if he or she is deprived of his or her “otherness.” The banning of all problematic language, problematic clothing, controversial jokes, satire around certain topics at home, in the media, at the university, in political debates, in events such as this one, usually results in the enforcement of love, respect and empathy for the other. Whether or not this enforcement actually brings us closer together through dialogue and debate is something I’m not sure about.

Thoughts about Brexit and privilege - Exeter Stand Together Event I 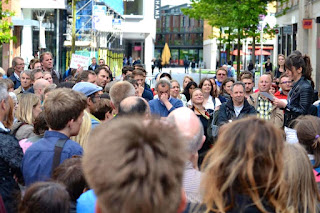 I am a Portuguese migrant.
But to say this is not enough. Let me try again. I am a Portuguese migrant who lives in a pretty comfortable situation in the UK. I am not a jobless migrant. I have a stable job that can’t be performed by someone who does not speak Portuguese, which means that I am not seen as a direct threat either to England’s self-defined identity or to most jobless British people. I have never been a victim of explicit racial abuse, mainly because I am white enough, wealthy and healthy enough, heterosexual enough, young enough, and I don’t stand out too much from the crowd, or speak too differently. People don’t stop me in the street to ask if they can touch my hair or where I come from, and whenever I search for a new place to rent, I am looked upon favourably by the landlord simply because of my university email account.

To say that I am a Portuguese migrant is, therefore, not enough to explain my situation of privilege. As a trilingual, highly educated white woman, working, playing and paying her taxes in this country, I am what some call a “wanted migrant.” My body is not entirely out of place. This needs to be said, because a migrant is rarely thought of as white, and white people tend not to be seen as migrants. They can be expatriates, guests, tourists, or professionals who fancied a change of scenery, but not migrants. Migrants are defined by skin colour, discrimination, and, to be sure,

I did not die or drown at the border, trying to get in.

Instead, I woke up one fine morning in 1986, to find out that I was already inside the barbed-wire fence. I was 6 when Portugal, without the help of a national referendum, became a EU member. This allowed me to arrive in this island by plane, and under the life-changing, eye-opening, wonderful European Erasmus Exchange Programme, back in 2000. I didn’t know it at the time, but that year spent in Manchester, funded partly by the EU, and mostly by the Bank of Mum and Dad, would change my life dramatically. Although I had studied English in Portugal for two years, I spent the first three months of my Erasmus life unable to understand a word of Mancunian, and wondering why bus drivers loved me so much, with their “Hello, luv” greetings. I came back to Portugal at the end of 2001 to finish my Coimbra degree, and I eventually found a job as a teacher. I enjoyed teaching, but I was restless and I wanted to carry on studying, so by 2004 I was back in Manchester, this time with the emotional/professional support of my supervisor and friend Hilary Owen, and the financial help of the Fundação para a Ciência e a Tecnologia, the national funding agency under the responsibility of the Portuguese Ministry of Science, Technology and Higher Education, who would pay for my MA and PhD fees, accommodation and travel expenses in the next five years. The Foundation’s budget encompasses funds from the Portuguese state budget and from European structural funds, so once again I found myself living in the UK because of Portugal’s EU membership.

Although I am the embodiment of a generation of ambitious, cosmopolitan Portuguese who grew up flirting with the idea that we were all European, I do not think that the EU is perfect. Portugal exited its bailout programme in May 2014, but the country will continue to face the consequences of aggressive austerity measures imposed by Europe for years to come. Angela Merkel’s official response to the migrant crisis is for EU members to pull together and provide shelter for people fleeing war or persecution, but most members have failed to do this, building anti-immigrant fences instead.

Having said that, even Portuguese film director Miguel Gomes latest film trilogy, Arabian Nights, which was produced as a response to the austerity measures forced on Portugal by the EU, even that trilogy is a European co-production, with money supplied by France and Germany!

So, in my experience, the advantages of standing together truly exceed the disadvantages. I have benefitted tremendously from living in this country, and that is the reason why I am still here and not elsewhere. I cannot stress enough the importance of the kind of support I have received in England in terms of education and training, career advancement opportunities, and above all, emotional bonds, all of which have allowed me to grow and thrive in a foreign country.

But I also like to think that the UK has benefitted, if only modestly, from my partly Portuguese-funded, partly EU-funded immigrant life. As a university lecturer I am committed to making diversity a priority, not only in terms of the courses I offer, but also in terms of going out of my way to pass on to my mostly British students the notion that striving for inclusion and balance will lead to empowering and real changes in their lives. As a researcher, I spend an increasing number of days thinking about how to connect with the local communities, how to democratise access to knowledge, how to bring diverse voices and experiences into my research.

Brexit is not the result that universities hoped for. I am particularly concerned about what it will mean in terms of:

Furthermore, I am worried about what Brexit will mean:


Even though we all know that nothing will change overnight, there is a lot of uncertainty and anxiety. Brexit provides a real challenge for Modern Languages in particular, since this is an area that logically benefits from a healthy and open relationship between the UK and European countries, from collaboration and the free travelling of people and ideas. Pulling out of the EU is not going to make any of this any easier.

But right now, I think it is time that we stand together, take a deep breath and get ready to start re-shaping our relationship with Europe. I want to speak out for responding well and engaging fully. Other readings are possible that resist the impulse to be hateful, ungenerous and bitter. We need to find a new language to deconstruct our privilege and start crossing borders. This referendum has given us the opportunity of a lifetime: to think of new ways of opening up to Europe, opening up to the other, and ultimately to ourselves. And what better way to prepare for this than start learning a new language?

I want to end by quoting a book that I discovered when I first moved to Manchester 16 years ago, when I first experienced the life of a migrant. The book is by Gloria Anzaldua’s book, Borderlands/La Frontera: The New Mestiza, about her life growing up on the Mexican-Texas border:

“The world is not a safe place to live in. We shiver in separate cells in enclosed cities,  shoulders hunched,  barely  keeping the panic  below  the  surface  of the  skin,  daily drinking shock  along with our morning coffee, fearing the torches being set to our buildings, the attacks in the streets. Shutting down. (...)

Alienated from her mother culture, ‘alien” in the dominant culture, the woman of color does not feel safe within the inner life of her Self. Petrified, she can’t respond, her face caught between los intersticios, the spaces between the different worlds she inhabits.

The ability to respond is what is meant by responsibility.”

Thank you for listening.
Posted by Ana at Tuesday, September 27, 2016 No comments: