A feminist gets married 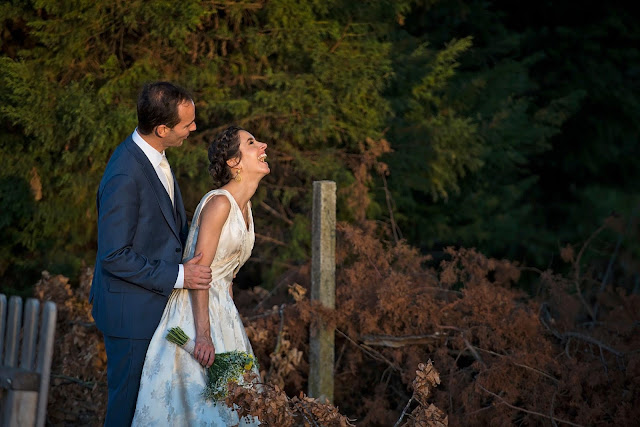 The day came when he proposed and I accepted, which led to a feminist getting married.

I was busy proposing something myself, that is, writing a grant proposal. We had come back from a bike ride, and I had gone back to the office to carry on with my study leave duties. Sitting down at my desk, which faces a window that opens to the knowledge of trees and green bushes, I didn’t understand, at first, why he’d put a ring on top of the book that was open to my left.  I almost asked him not to disturb me because I was having an idea and trying to put it into words. Then the penny dropped. I looked at him, then at the ring, then at him again. I smiled, and said “what?” a few times, and finally exclaimed “Yes, let’s get married!”

I confess there was some hesitation in my answer, as much as there was in his. But I saw this ring as the starting point of a journey into life as a team, and although I was and still am very much afraid of this journey, of what it may bring to someone who calls herself a feminist, I took it wholeheartedly, in my own utopian way.

In the six months that took us to organize the wedding, family interests and social expectations calibrated much of what we wanted to do. I had never thought much about weddings, but I knew well enough what I didn’t want to happen. I persisted as a feminist killjoy for as long as I possibly could, and I had my victories, some of which were big, many small. Can you name a feminist who doesn’t believe in the power of small victories? The person who married us was a cheerful woman who mentioned equality several times throughout the ceremony. The person who translated the ceremony into English was a renowned feminist male colleague and dear friend. After months of endless fighting, I ended up taking my husband's last name, but without renouncing any of my last names. I named our table after my favourite women writers. I bought a second-hand, inexpensive dress. I gave a speech alongside my husband. I prepared a video documentary that honoured my grandmothers and their bolos de boda tradition.

It was an effort from all sides, to fight for our joy and ideals on our day. But to pick our fights: that is, I think, the greatest lesson. To understand what tools we have to struggle, becoming aware of what we can do, how far we can go. How much we can let go. In the run-up to my wedding, everything I believe in became hyper-real, alive and urgent, and more personal than ever. I was happy, sad, shimmering, frustrated, loved, in love, touched, enraged, vulnerable and strong. Feminist identity was a site of struggle and negotiation like never before. Placing feminism on the grounds of my wedding venue, which was also my parent’s garden, felt like opening my body to the world for the first time. In an episode that my seven girlfriends from Sertã will love to find out, I inexplicably lost my bra as I was getting ready to jump into the wedding dress, which led to the ceremony being delayed by half an hour. But I did not forget to leave a book by a favourite woman writer under the tree where we got married. I married by silently disturbing the grounds that I had accepted, and by trying to forget about other people’s judgements of what the good daughter, the good bride and the good feminist look like.

It was beautiful because it was tough and earned, and because our own mix and match of traditions and innovation was thought-through to the last detail and fully experienced. The greatest victory will be to be able to say in a few years’ time that my wedding year shines through my relation with my husband as much as through my writing on feminism and women.

In the meantime, I'm still waiting to hear on that grant proposal. Fingers crossed! :)
Posted by Ana at Tuesday, August 15, 2017