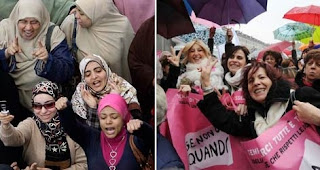 Sometimes it feels like we're still surfing the second wave... As I was reading this post from La ventisettesima ora - un blog al femminile curato da 15 giornaliste del Corriere della Sera - I remembered Kathleen Sheldon's conversation with Raquel Fernando, a cashew worker and OMM (Organizaçao da mulher moçambicana) activist from Beira, which may be found in the introduction to Pounders of Grain: A History of Women, Work and Politics in Mozambique. Here's a quick summary. Walking along a dusty road, Fernando asked Sheldon if women in the US had a women's organisation like OMM. Katheen explained that "American women's organisations were not only autonomous from governmental structures, but were even antagonistic to them", whereas in Mozambique there was a very close connection between the women's organisation and the ruling party Frelimo. As the discussion unfolded, Fernando suggested that perhaps Sheldon could use her experience in Mozambique to help American women develop their political organisations. This chat led Sheldon to rethink her own assumptions about women and political organisations. I think the insights of Sheldon's thought-provoking introduction (and whole book) would help answering (or perhaps rephrasing?) Cecilia Zecchinelli's question: "ma l'esperienza di noi italiane può servire oggi alle donne arabe?"

"How to Be a Woman" - an uncomfortable laugh 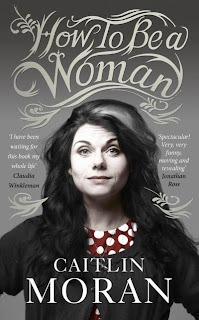 The title of Caitlin Moran's new book, How to Be a Woman, is a nod and a wink to Simone de Beauvoir's famous argument that "One is not born a woman, one becomes a woman". The publication of The Second Sex in 1949 disrupted the eight-century-old model which had been used in France for written debate on the woman question. Beauvoir did not consider herself a feminist at the time of the publication and this changed the terms of the discussion by producing a text that did not defend or answer previous anti-feminist attacks. As the editors of New French Feminisms argue, the centre of her study was elsewhere: how does a female baby become or not become a feminine woman? (Courtivron and Marks 1980: 7). Instead of enumerating or realigning categories, Beauvoir goes on to analyse a process. Instead of suggesting that all the available systems were biased because they had been devised by men, she argued that they were biased because they were limited (they left women out). The question in The Second Sex is thus no longer relegated to an anti-feminist/feminist debate. Rather, the question becomes fundamental to any discussion of human culture.

Despite the wink and the nod, How to be a Woman doesn't follow this path. It's a book that defines feminism as a search for common sense in the eternal battle of the sexes. As such it manages to reinforce not only a very reductive definition of feminism (which is much more than a search for common sense), but also an aura of negativity around this term, which tends to appear only in opposition to something else.

Don't get me wrong. I really enjoyed Moran's new book. It's witty and chatty and a great beach read. But its aspiration to being a feminist book had a perplexing effect on me. Every funny remark (and there are some really funny pages) made me feel very uncomfortable. This shiny new book, which aims to popularise, revive and energise feminism, and to take it back to the streets again, has the potential to achieve a level of visibility that I will never dream of achieving with my obscure academic papers on the Three Marias's long-forgotten New Portuguese Letters. I mean, you don't have to have been to the UKFeminista's suffragette school in Birmingham this summer in order to imagine how this book must be inspiring the protest techniques of would-be-twenty-something London activists.

So where does this sense of discomfort come from?

How to Be a Woman seems, at first, to proudly bear the burden of representation of the working class. With this book, Moran knits her own this-is-what-a-working-class-girl-turned-feminist-looks-like literary shirt. Caitlin is the eldest of eight children, and was brought up in a small council house in Wolverhampton, the reader is told repeatedly. As we learn at the very beginning, she turned into a precocious writer because she had literally no friends. Except, that is, Saffron, a psycho German shepherd who used to manifest distress by licking its vagina.

But instead of tracing this visible burden's weight, the book goes elsewhere. From chapter 4 onwards, the middle-class bias starts popping in unannounced. For example, the bulk of the chapter dedicated to “I am a feminist” boils down to an attempt to exorcise Caitlin's own guilt complex for hiring female domestic help. She argues painstakingly that there is no difference between paying someone to clean your house and “paying someone to apply peroxide to your bumhole and make it look like Marilyn Monroe”(83). Everything turns out to be the choice of free, autonomous female individuals, and no decision whatsoever has anything to do with myths put forward by the patriarchal society we live in. Why bother asking women why they want to have Marilyn's bum. Want it? Have it. Do you wish to work as a cleaning lady? Then go and fulfil your life-long dream!

An interesting point made in How to be a Woman is that women are not naturally co-operative. Caitlin doesn't “build in a 20 per cent 'Genital Similarity Regard-Bonus'” (85) if she meets someone else wearing a bra. It's perfectly OK that this is not a super original argument (Walter wrote exactly the same thing in 1998). For an idea to sustain itself and enter people's brains and make change it needs a lot of repetition, and witty repetition, if possible. One of the problems with this book is that, again like Walter before her, Moran is still – wrongly, I would argue – fighting for a piece of the pie of hegemonic power. Her rule of thumb, which allows her to judge “whether some sexist bullshit is afoot” (86), is asking the simple question: “Are the men doing it?”. To Moran, one needs to reclaim the term feminist so that women can do what men are doing and refuse to do what men are not doing.

This is what Moran's feminism seems to be all about. The problem, then, lies in the terms of the discussion. It's really hard to miss the flaw here. Never mind the lack of real social and political analysis. We can assume from anecdotal evidence taken from Moran's working class childhood memories that all her middle class feminist experiences equal reality for Woman everywhere. The arguments put forward in the book are poor and often circular, with little real analysis behind them. What's more, the book is meant not to have real analysis behind it, so that it can reach more women, real women who aren't academics. As if theory wasn't needed in the world we live in, and as if real women couldn't follow arguments that aren't circular and backed up with reliable evidence.

The chatty, universalist liberal feminist tone of the book of How to Be a Woman is not new. Moran's book is part of a wave of literature dealing with a certain notion of crisis within feminism, a desire to reclaim the term and give it a new direction. Others before it have claimed that the second-wave achieved only half of the revolution's goals (think Natasha Walter's The New Feminism, and Living Dolls: The return of Sexism). But I find myself thinking twice before embarking on this rediscovery of feminism.

I've been thinking a lot about whether I'm a feminist or not. I've recently decided that I should start calling myself a feminist. I have since realised that I'm not comfortable calling myself a feminist. I've decided that I'll go on calling myself a feminist. My discomfort, which stems from the kind of ambivalence I experienced towards Caitlin's book as a Portuguese woman working in the UK, is not enough to prevent me from enjoying the popularising buzz of her writing. After all, How to Be a Woman is doing its bit to help place feminism back on the UK agenda for public discussion. This is no small feat. As a feminist, I acknowledge the feat, but reject the terms of the discussion. Still, I share the joy in the air.
Posted by Ana at Thursday, August 18, 2011 1 comment:

"Feminists don't have a sense of humour" (never took a lesson!)

Alice in researchland is thinking that... 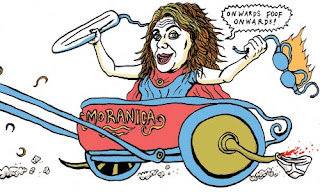 The more I think and read about Novas Cartas, the more I'm convinced of this simple truth. I'm finishing an article about this (hence the blogger's silence) and will post it as soon as it's ripe.

Another silly reason for my long blogger's silence: I'm reading the at times hilarious, but feminism-rocks-kind-of-superfluous How to Be a Woman, by Caitlin Moran (above in a Neal Fox illustration). More about this soon too...