Of passionate nuns and religious thrillers 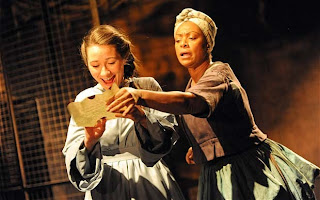 I just found out about the tale of yet another passionate nun, this time Mexican, chamada Joana Ines de la Cruz, who apparently wrote a play about romantic entanglements in 1683... Sor Juana is the subject of Helen Hedmundson's new play, The Heresy of Love. At the RSC until March 9. Exciting!
Posted by Ana at Monday, February 13, 2012 No comments:

Flabbergasted, outraged, fuming, dead serious. This is the state in which we've been signing petitions, writing letters, starting up facebook groups, inviting family, friends, colleagues, (ex-)students to get involved. Fully aware, of course, of the pressures currently constraining the sleek interiors of certain European Faculty board meeting rooms. But it isn't working. Why are all our arguments - to keep Portuguese alive and growing in some European universities - falling flat on their back?


Now listen, and listen carefully, and again and again:

Portuguese is a major world language.
Of critical importance. Spoken in eight countries and four continents.
More than French and German.
It has over two hundred and fifty million speakers world wide.
Portuguese-speaking countries are de facto leading economic actors in global affairs.
Closing down Portuguese destroys minds!
Closing down Portuguese is like closing down Portuguese discourse itself.
Seems pretty important to a lot o people.
It's a very melodious language with superb poetry and literature!
Finance will profit from that... eventually.
As an ex-student, I could talk with everyone in Portugal last December, it was wonderful!
Dutch students are entitled to know something of its culture.
I studied a BA in Portuguese and it was the most amazing thing I've done.
Yay for learning Portuguese! ;)
Closing down Portuguese is bad management.
A very unintelligent decision.
Escândalo!
Fernando Pessoa's poetry.
A Holanda deve reconhecer e reverenciar a importância dos judeus portugueses.
Portuguese doesn't deserve this treatment!
One should not burn down one's bridges.
I'm a Portuguese Minor and love the language!
Closing down Portuguese is an absolute disgrace.
All reasons before.
Now that Portuguese is really growing they want to close it down.
Reconsider!
My mother tongue is a rich and beautiful one.
Mw van Rooy, maak dit plan ongedaan!
It has a rising global significance as attested by the importance of Brazil among the BRIC countries.
Brazil has overtaking the UK as the 6th largest economy in the world.
Brazil is a rising power.
A promising market.
A future partner.
My wife is Brazilian.
I work in Brazil.
Brazil.
Bra.
Zil.
Posted by Ana at Tuesday, February 07, 2012 No comments:

Save Portuguese at Utrecht!

The Faculty of Humanities at the University of Utrecht announced that the Faculty intends to shut down its BA program in Portuguese. Effects are to be felt very soon, with possible firing of all staff members after September 2012 and a last date for enrolment of students set for September 2013. This has been sent to the national press today and appeared in one of the most respected newspapers, the NRC Handelsblad. This is being done as a reaction to imposed budget cuts. However, in the plans announced so far Portuguese is the only Department that is targeted for a full shut down. Two other BA programmes, on Arabic and on Theology will be allowed to restructure and become part of related BA Programmes. For Portuguese no such option was contemplated; neither together with Spanish, nor in terms of Latin American Studies.

SPREAD THE NEWS AND WRITE a letter of complaint addressed to: