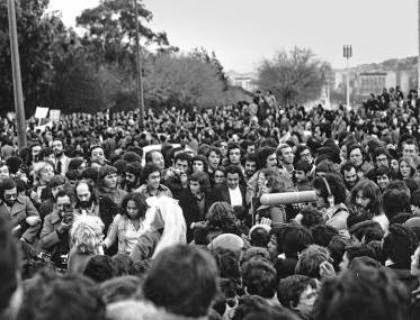 One question that's been on my mind lately is how we think about protests, how they work: what makes a real protest, a successful protest? I took this question as the starting point for a paper that focused on the Portuguese and Spanish women's movements (linked to second-wave feminism) around 1975. In order to do this, I drew on two case studies, though I'm only going to write about one of them here.

This case study was a demonstration organised by the Portuguese women's movement on 13 January 1975 in Parque Eduardo VII that was sabotaged by the Portuguese media, leading around 2000 men to appear in the park to fight the women, hitting them, grabbing their bodies, and attempting to undress them. I was struck by the way in which most commentators of this episode describe the demonstration as an event that did not actually happen, despite the fact that the women appeared with their banners and the symbols of their oppression in the park, carrying them as they walked through the men.

So, what if I assumed for a moment that the protest did take place and that it was successful (given that it grabbed the attention of the whole country, and that it even reached other countries, such as France)? This simple assumption might help me make the most out of what seems very little. When you work on Portuguese feminism you soon realise the importance of this kind of exercise.

Once I stopped denying that the feminists were there, that they were protesting, I was ready to finally focus on their bodies in the park.

Judith Butler's "politics of the street" (2011) guided me through these women's bodies. For Butler, to appear on the street is not only to to act together, to accept other people’s perspectives of ourselves and our bodies on the street, as argued by Hannah Arendt, but it is also to appear somewhere, which means that we need to pay closer attention to the bodily dimensions of action. For this understanding to occur, it is not enough to focus on the struggle between bodies in a given space. We also need to think about bodies from another perspective: “we have to think," she writes, "about space as acting on us, even as we act within it” (Butler 2011:6).

Building on this from my unavoidable post-revolutionary Portuguese viewpoint, I recast Butler’s politics of the street in the context of the Carnation Revolution and the ensuing transition to democracy. What kind of street was produced by the Revolution's political idealism, by the "miracle" of the supposedly bloodless and peaceful Revolution? What kind of "street lyricism" supported it? And did it play a role in the denial of the feminists' non-lyrical demonstration?

Once I translated Butler’s politics of the street into the context of this lyrical space of appearance, it became clear that I wasn't writing this paper in a memory void, that I had a memory of this protest, although I hadn't been born yet when it happened. It strikes me that the revolution's street lyricism has created an idealised perception of the space of politics that is able to shape more than we think. Certainly how we remember. We need to remember better. More creatively, courageously.
Posted by Ana at Thursday, July 03, 2014 No comments: