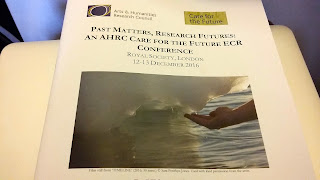 I’m an early career researcher who is about to become a “normal” researcher (whatever that means) in exactly 10 months’ time. This makes me a “young old” scholar of sorts (sigh). Over the past four months I started to feel uneasy about being a young old scholar. It didn’t bother me much during the summer, when I still thought of myself as kind of young young. But, after spending Term 1 trying to juggle a heavy teaching load with the urgent, but ultimately impossible, task of finishing my pending AHRC ECR grant application, it suddenly hit me that – shock horror – I was getting young old, and that this was my last chance to take advantage of the ring fenced money kept aside for UK-based ECRs’ researchers, young and old alike.

So I was very glad to find out that the organisers of the conference “Past Matters, Research Futures” not only accepted the panel proposal on “Consuming Authenticities: Time, Place and the Past in ‘Authentic’ foods and drinks” that my lovely group of colleagues Deborah, Emma-Jayne, Anna and I put together, but also made a point of dedicating a significant amount of conference time to this and other matters that are so much in the minds and hearts of young young, young old, and old young (explanation below) researchers. 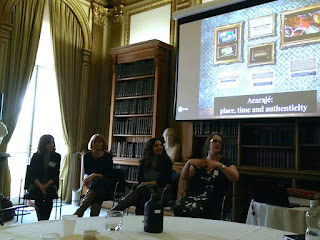 The event was a joint endeavour between the AHRC and the Cluster of Excellence LABEX, and it brought together UK and French scholars as well as non-academic partners to address issues that are of common interest to both the Care for the Future theme and the LABEX Pasts in Present: History, Heritage, Memory. The conference, organised mainly by ECRs, focused not only on research issues but also on two aspects that are often neglected in conference discussions: the particular challenges of both early career research and partnership working.

I confess I do not (yet) master the art of fruitful, joyful, happily-ever-after partnerships with non-academic people. I have been rejected a few times. I mean, my proposals have been rejected a few times. The first time it happened I wanted to close down my inbox and run away to Dartmoor. The second time it happened, I decided to say thank you and move on to the next institution on my list. The third time it happened I took a step back and thought of proposing a counter offer. I am still thinking, and, hey, who knows, maybe it will bear fruits, or not.

(Keep reading my blog to find out.)

Anyway, one thing I wanted to write here is that attending this conference has given me the courage and inspiration to really think harder about creative ways of nurturing the contacts that I have been lucky enough to gather as a young young researcher, as they may assist me in my young old short life. I listened in complete awe to the presentation of Katharina Zinn, an Egyptologist from the University of Wales Trinity Saint David, Lampeter, who told us – with a smile –about the advantages of not having funding in the initial stages of your project. She started a cooperative project with a local Museum, after discovering a number of Egyptian artefacts hidden away in the basement of the Museum (one was a headless statue, one was a wooden beard, another was the tiniest plate). Her small huge discoveries led her to bring these objects back to life via exhibitions, story-telling and even a “Museum of Lies”! Who wouldn’t be inspired by this stuff? 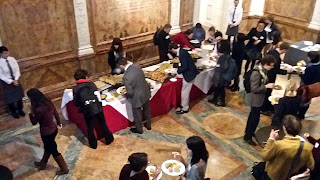 I was also intrigued by the presentation of a film artwork, The Ten Commandments, which was commissioned by the AHRC-funded project “Re-configuring Ruins: Materialities, Processes and Mediations,” in conjunction with the Museum of London Archaeology and NewBridge Project Newcastle. My notes of this panel read:

“What turns a ruin into a ruin? Guadalupe and the American flag. (Look, the Portuguese flag too! Religious processions with the Portuguese flag in the streets of Guadalupe, cool!) The Ten Commandments, ruins of a movie, montage of images and sound. There are echoes and double images. Splitting the screen into three breaks down the linearity of the story into three viewpoints that sometimes overlap and unite. Generative remembrance: during the process of recollection, remembering not what happened but something else. (Not sure what this means.) Ruina: social downfall and ruination. Duality of the ruin. Social relationships in the real world. Embodied action. Structured narrative, gaps and silences and black screens in the movie. Absences. Creative destruction of capitalism. Curated heritage ruins. Surface and depth. Surface: small town America, the sand dunes, four-by-four sand driving, driving the sand like surfers; Depth: religion, the immigrants. Memories, legacies meshed together in the everyday. Co-creation. There was an open call for artists (commission process): the artist had to create a piece on a given topic and would have freedom. There were no questionnaires as they wanted to avoid using art: they wanted art to speak for itself and give full freedom to the artists. (not convinced by the group’s premise that not wanting to “use” art was something inherently positive.)”

The conference booklet detailed an ambitious and innovative list of potential outputs and resources. The venue included a nice BREAK/OUT room, which provided delegates with a quiet space for calling home, unwinding, or writing and filming responses, ideas and resources for future gatherings. I also enjoyed the way in which day one ended: with a “Question Time” – style panel discussion on current priorities in research and the world of heritage. Some of the questions that were thrown at the panellists were:
1.    How can the study of heritage relate to or inform global challenges and sustainable development goals?
2.    What advice would you give to ECRs working within the heritage sector wanting to maintain a research profile?
3.    What do you suggest is done with heritage assets that we must let go of?

The conference ended with many what nexts. I agree with Prof Andrew Thompson, who stressed that the role of early-career researchers is changing, that it is an ambiguous place to inhabit, not only if you are young old like me, but also if you are old young (if you had a previous life outside academia and are trying to balance the two worlds in your life). And yes, the ivory tower image does not seem to apply any longer, at least not to most people participating in this conference, and certainly not to most ECRs out there.

Except, there’s something about the ivory tower metaphor that I want to preserve as a small personal intangible heritage for the future of my own. Something about blue skies and utopian meanderings that come with and around the word “tower,” which are far from impacts and statistics and goal-oriented thinking, and far too from simple writing and clear sentences. Closer, much closer to ascending stairs and the lightest, deepest free fall. I don’t want to let go of that just yet. Call me young old.

"The complexity of things - the things within things - just seems to be endless. I mean nothing is easy, nothing is simple" (Alice Munro)